Cynon's doing Cynon things, so I'll post it on his behalf.

I think it's gonna be pretty unanimous on this one. Stay on the grass, you imbecile. Try not killing the points leader next time with your backwards antics. 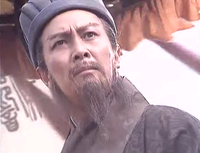 It will be a day that Ben Atkins and Scuderia Tutino remember for the rest of their days, as Ben Atkins guided car #50 to a tenth place finish at the HLR Circuit after a conservative pit strategy paid off in their favour. Atkins and the #50 crew brought the car in for an extra pit stop, and while other teams took a chance with fuel mileage, many cars failed to make it to the end, putting Atkins in prime position to get the elusive top 10 that Scuderia Tutino has been going after for years.

This finish is Atkins' third career top 10 finish in the TM Master Cup Series, and his first since his Independent's Trophy bid in 2012.

"I don't think I've ever celebrated a finish that much... ever." said Atkins, "This is something that the team have wanted to do for years, and I can safely say I have dreamed of having the honour of scoring the teams first top 10. Now the moment is here... it's incredible. The call to pit was fantastic, and it was 100 percent what got us here. This one was all the team. I'm just proud that I could be a part of it."

"Every driver dreams of making history, and now that I've managed to do that... I can't believe it. This is a feeling and a moment I will cherish for as long as I live."

Atkins will attempt to make the Round of Decatur in two weeks time, where his first top 10 career finish came in 2011.